Earlier this year I accompanied a school group on their trip to Ypres, led by Steve Garnett of Gesta. The first stop on the salient was Essex Farm Cemetery, where John McCrae wrote his famous poem ‘In Flanders Fields’. After an introductory talk by Steve, the students were given some time to look around the cemetery.

For most of them this was the first Commonwealth War Graves Commission cemetery they had visited and they were obviously moved by what they saw. There are over 1,200 soldiers commemorated in Essex Farm, including Valentine Strudwick who was killed aged just 15, only just older than some of the students themselves. Looking at the differences between the headstones they asked a number of pertinent questions – what the different insignia meant, why some of the rows were neat and others weren’t, why some had no name – and so on.

One of the students came up to me and asked why a group of soldiers were all buried close together; on closer examination they were nine men all from the 17th King’s Royal Rifle Corps, their date of death 25th December 1916. I have visited Essex Farm on a number of occasions but had not picked up on this group previously. The men are buried in plots II.W.1 – II.W.9, a row that stands alone at the back of the cemetery to the right of the Stone of Remembrance. I surmised that it was likely they were all killed together in the same incident. I recently came across my picture of the headstones from that trip, and resolved to check what had happened that day. 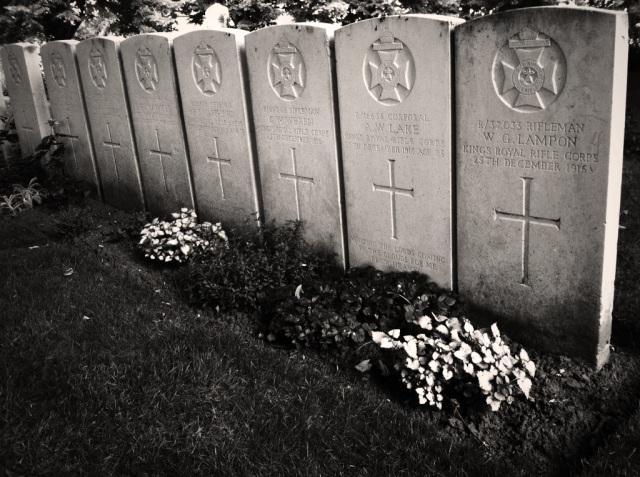 The graves in Essex Farm cemetery

The 17th Battalion KRRC, was one of the new army service battalions. They had been formed in May 1915 by the British Empire League, a pro-imperialist organisation, and had landed in France on 8th March 1916.

The battalion had spent December training and in reserve interspersed with spells in the front line near the Yser canal. Casualties from shell and rifle fire had already been incurred on the 19th. The four days prior to Christmas were spent in reserve, but on Christmas Day, they headed to the frontline near Brielen, north west of Ypres. Their headquarters was situated at Trois Tours chateau.

The battalion war diary records ‘Normal routine is carried out, the xmas holiday being postponed until Brigade moves into reserve. The battalion moves up to the front line holding its former position. At 9pm our artillery bombarded the enemy’s trenches. During the hostile retaliation we incurred casualties amounting to nine other ranks killed and five wounded.’

After the unofficial Christmas truce of 1914, efforts were made to ensure that this did not happen again in 1915; Christmas Day 1916 was no different and the CWGC database records that 267 men died on 25th December 1916.

The nine men from the 17th KRRC who were killed that day and are buried at Essex Farm were:

Corporal Arthur William Lake, aged 25. Son of Emily Jane Lake, Of “Roxburgh,” Russell St, Sidmouth, Devon. He is commemorated on Sidmouth war memorial. The epitaph on his headstone at Essex Farm reads “Waiting the Lord’s coming in the clouds for me from heaven”.

Rifleman Herbert James Matthews, aged 19. Born in Charlton. Son of Elizabeth and James Matthews, of 28, Adelaide Rd, Brockley. His epitaph reads “There is no death tis but renewing life”.

Rifleman Clyde Barton Slator, aged 37. Son of William Barton Slator and Emma Slator, of Greenwich; husband of Ada Louise Slator, of 11, Maidenstone Hill, Greenwich. He had enlisted on 17th June 1916. He is remembered on his parents’ grave in Greenwich cemetery along with his younger brother Gordon, killed in 1918.

Christmas was just another day in the trenches for these men, their deaths statistics of the daily attrition of trench warfare. However the fact that they all died together on Christmas Day and are all buried together adds an element of poignancy, which resonated particularly with some of the students on that trip.