The average shopper in Guildford may be forgiven for not paying a visit to the church of Holy Trinity at the top of the High Street. The attention of those who do venture down the path at the side of church will likely be drawn to a statue of a crusading angel, made more noticeable by the bright hue of the verdigris covering its surface. 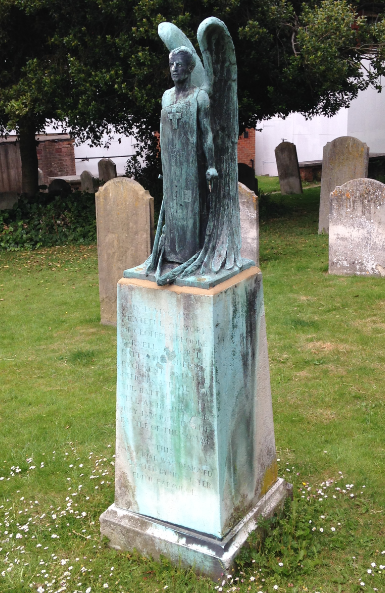 The memorial at Holy Trinity church

The inscription on the front of the plinth reads:

‘In loving and grateful memory of Geoffrey Brooke Parnell, Major 1st Battn The Queen’s Regiment, and the officers and men of the battalion who fell at High Wood July 15th 1916 in the Battle of the Somme.’

The 1st Queen’s had suffered heavily at Gheluvelt on 31st October 1914 and had spent much of early 1915 being brought back up to fighting strength. Since then it had been stationed in the La Bassee sector. This was no ‘cushy’ posting, and the battalion was regularly engaged in trench raids, patrols, and mine warfare right up until it moved to the Somme on 9th July to relieve the 31st Division.

On 14th July a pre-dawn attack had proved successful, capturing Bazentin and advancing as far as High Wood, although the opportunity to capitalize on the gains and take the wood virtually unopposed had not been followed through. The 100th Brigade received orders to support the right flank of 21st Division in an attack on the German second line the following day. The Brigade’s objective was to capture the German ‘Switch Line’ that snaked north west from High Wood in front of the village of Martinpuich, with a secondary objective of taking Martinpuich itself. 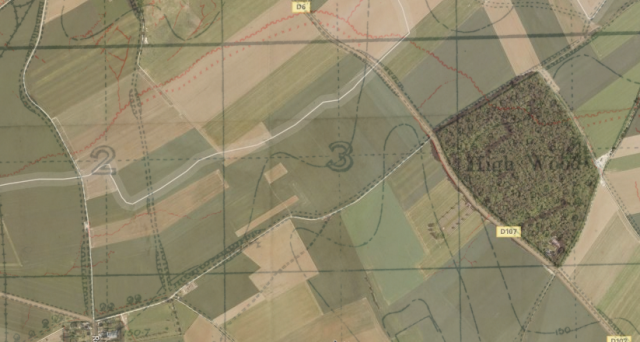 Late on the 14th the 1st Queen’s moved into position along a sunken lane between Bazentin and the looming mass of High Wood. The 9th Highland Light Infantry on the battalion’s right was supposed to dig in along the boundary of High Wood to its north west corner as a jumping off position for the following day’s operations, but was unable to do so as the Germans still occupied much of the wood, contrary to reports being received from 7th Division to the right. Patrols sent out during the night by the 1st Queen’s reported that the Switch Line was occupied but not wired; this turned out to be inaccurate, as barbed wire up to 15 yards deep was encountered during the attack. It is likely that the patrols had in fact encountered a forward covering party of Germans thrown out in front of the actual Switch Line.

On the day of the attack Major Parnell had assumed command of the battalion, as the commanding officer Lieutenant Colonel Crofts was acting as understudy to Brigadier-General Baird, 100th Brigade. The strength of the 1st Queen’s before the action on 15th July was 25 officers and 697 other ranks. 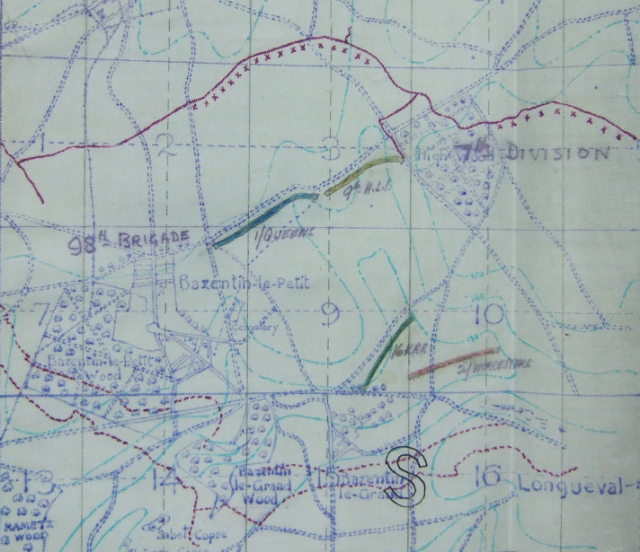 The positions of the battalions of 100th Brigade before the attack

The position the battalion was occupying was open, flat and practically devoid of cover. Before dawn on the 15th the battalion had to put out a defensive flank in an old German trench owing to the enfilade fire coming from High Wood. Early in the morning the battalion received confirmation of its orders. It was to advance north on a front of 500 yards towards the German line 900 yards away. Whilst getting into their positions the Germans opened a heavy enfilade fire, causing several casualties including Captain Gurrey, officer commanding C Company. A bombardment of the north west corner of High Wood was requested, but few shells landed there. A heavy mist had covered the shallow valley at dawn, obscuring High Wood and Martinpuich, but lifted just before the attack began. Brigadier-General Baird recognised that the success of the attack depended on High Wood being taken first, but his request to delay the advance until the wood had been cleared was over-ruled.

The 1st Queen’s war diary recounts the details of the attack:

“8.55am Front wave started and almost at once came under fire from both flanks and the front and second wave came under similar conditions and 2nd Lieutenant Richards and many men were hit. Line pushed on till within about 200 yards of the German trench when they came under very heavy fire and started to come back. At this stage while the men were being rallied Major Parnell came up on the left, with Capt & Adjt Carslake and in the most gallant way started to lead forward the attack, but was almost immediately hit and killed & Capt Carslake soon afterwards was wounded and 2nd Lieut Crichton killed.

The enemy’s wire had not been cut by the artillery and when about 100 yards from it the line halted in the long grass and started to dig in. Two platoons from the support company were now sent forward but did not reach the firing line apparently turning off to the left.

At 9.25 Capt Foster A Coy sent back a message that he had reached a point about 100 yards from enemy’s trench, that wire was not cut and HLI had not come up, but message did not reach the support line.

10.05 Lieut Thrupp on left sent back that he was held up by wire and asking for bombardment to be resumed and for reinforcements. Message got thro’ and bombardment started about 12 noon but all shells were short, some pitching behind our own line. 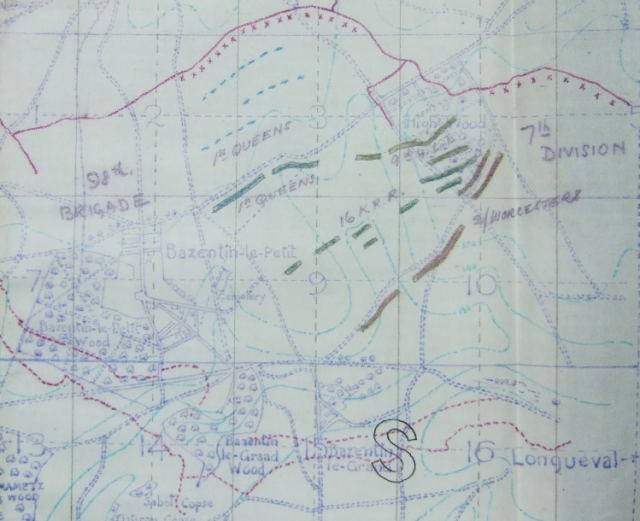 The positions at 12 noon

12.30 No reinforcements coming up officers remaining held a conference and decided to withdraw as there was considerable danger of their being cut off from the right. Retirement was carried out in small parties to original position on road. This position was heavily shelled during the remainder of afternoon and evening and during the night of 15th-16th. During the night strong patrols were sent out to get information and bring in the wounded.”

At 4am on the 16th the battalion was relieved by the 5th Scottish Rifles and retired to an area near Mametz Wood. The failure of the artillery to cut the wire and the inability to clear High Wood prior to the attack meant that the attack had been unsuccessful.

Casualties were recorded in the 1st Queen’s war diary as five officers and 28 other ranks killed, 11 officers and 207 other ranks wounded, and 52 other ranks missing; a total of 303, or 42% of the battalion’s strength. The war diary recorded that casualties amongst NCOs in particular was very heavy, with 20 Sergeants and 58 other NCOs being among the casualties. The CWGC database records 71 deaths on the 15th.

Major Geoffrey Brooke Parnell. Parnell was a pre-war Regular soldier, who had been overseas with the battalion since November 1914. He was also the cousin of Henry Bligh Fortescue Parnell, 5th Baron Congleton, who had served with the Grenadier Guards until he was killed in November 1914.

Captain Roland Percival Slatter (commanding B Company), aged 28, from New Malden. He had served in the army for 10 years and had been the Regimental Quartermaster Sergeant in the 2nd Battalion prior to being commissioned.

Telegram sent to Roland Slatter’s father, notifying him of his son’s death (reported incorrectly as occurring on 17th

Second Lieutenant Arthur James Crichton, MC (battalion Lewis Gun officer), aged 19, from Hampstead. Private Burt, C Company, stated that “…he saw 2nd Lieutenant Crichton hit by a rifle bullet. Informant was wounded just before his Officer was hit, and lay in a shell hole for about four hours, and he says Lieut Crichton was quite close to him, in fact only about 30 yards away. Informant says he lay out in the open, but he saw him crawl a little way, and then he did not move again, and he thinks he must have died.”

Second Lieutenant John Hector Rouquette (A Company), aged 22, from Ashtead. He had attended Berkhamsted School before working for the Bank of Montreal in London. He was transferred to Canada in June 1914 but returned shortly after the outbreak of war to enlist. He had been with the battalion since February 1916 and was reportedly “killed instantly by enemy fire while leading his platoon forward.”

Other ranks who were killed included two brothers, Emile and Marcel Renaud, who were from Cranleigh and who were both Sergeants.

Private Harry Capon of Coldharbour was acting as a stretcher bearer during the attack. After dark he went out to find his Platoon Sergeant, who he had seen wounded in the morning; he did not return. His Captain wrote “He will be a great loss to the battalion, and his mother will, I hope, find consolation in the noble conduct of a true soldier, which her son has displayed.”

The other attacking battalions from the 100th Brigade had suffered even more than The Queen’s. 192 men from the 9th HLI were killed, commemorated by a cairn made up of 192 stones situated at the south east corner of High Wood. The support battalion (16th King’s Royal Rifles Corps) had 112 men killed, and the reserve battalion (2nd Worcestershire Regiment) 28. The actual number of casualties for the Brigade is likely to be even higher due to those who succumbed to their wounds in the following days; in the fighting from 15th-22nd July a total figure of over 1,600 casualties is recorded.

The 33rd Division’s History records that “…the whole attack had been a most costly failure. General Baird wrote of his Brigade that it had behaved with the greatest gallantry. The slopes lying to the west of Martinpuich and High Wood were a grim slaughter house. Dead, dying, and wounded lay thickly upon the blood-stained turf.”

The majority of those from 1st Queen’s battalion who were killed during the attack have no known grave and are commemorated on Thiepval memorial to the missing.

The battalion was back in action at High Wood on 21st July, although it would be mid-September before the Germans were finally driven out of the wood and the Switch Line was captured. 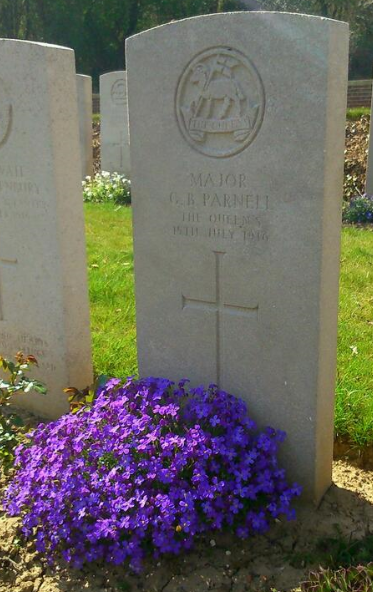