It has been a while since I last posted on here but I’ve been trying to fit in my ongoing research into the 1st Battalion The Queen’s (Royal West Surrey Regiment) when time allows. One project I recently completed was transcribing the 1914 star medal roll for the battalion. The roll lists all the men eligible for the 1914 star, or ‘Mons Star’; the criteria being that they had served in France or Belgium between 5th August and 22nd November 1914, the end of the First Battle of Ypres. The roll lists 1,635 other ranks and 65 officers, giving a total of 1,700 men who served with the battalion during this period. However in this post I want to focus on the fate of the original members of the battalion.

The battalion embarked from Southampton on 12th August aboard the SS Braemar Castle, and disembarked at Le Havre the following day. The medal roll records a total of 1,000 other ranks and 30 officers who disembarked at this time, slightly more than the prescribed War Establishment of 1,007 men; in fact the roll also does not quite tally with the numbers given in the regimental history, which records that 971 men and 27 officers embarked with the battalion.

The roll provides each individual’s regimental number, rank, name, date of disembarkation, and a remarks column. The remarks are broken down into three areas, as described in the roll:

(b) If transferred:- present regimental number, rank, and unit

(c) If forfeited:- cause

This leads to a number of descriptions in the remarks column such as discharged, dead, or prisoner of war. However many entries do not have any remarks recorded against them.

I cross-referenced the transcribed roll against other sources such as the Commonwealth War Graves Commission list of casualties for the battalion and International Committee of the Red Cross prisoner of war records. This showed a number of men in the 1914 roll whose fate had not been recorded in the remarks. Once these had been taken into account the breakdown is as follows:

*This is an aggregated figure of those listed variously as: Dead, Died, Died of wounds, and Killed in action 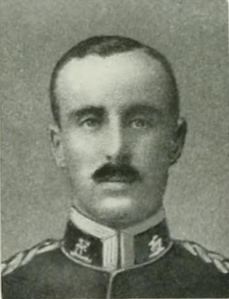 So one third of the battalion’s original members were killed and nearly a quarter taken prisoner; in total accounting for over 50% of those men who landed in France on 13th August. The first casualty (wounded) in the battalion was Lieutenant Pain on the 26th August (13 days after landing), who was shot in the hand by a Frenchman who mistook him for a spy. The first death was Private James Ayres on 27th August; he is buried in St. Souplet British Cemetery. The first officer killed was Lieutenant Roland Henriques, who lost his life during the Battle of the Aisne along with 26 other men of the battalion.

A perhaps surprising aspect of the figures provided by the medal roll is the number of deserters, accounting for 2% of the original battalion. Two men from the 1st Queen’s were ‘shot at dawn’ during the war, one in 1917 and one in 1918, but both were later recruits to the battalion. It would be interesting to try and establish when these 24 deserted and the reasons for their desertion. 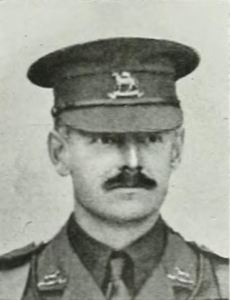 The number of other ranks who were wounded is not given in the roll, but the officers wounded are easily collated from the war diary. This shows that 11 of the 30 officers (37%) who disembarked with the battalion were wounded during the war. Add to that figure those who were killed or taken prisoner, and the number rises to 24, or 80% of the original leadership of the battalion. This includes the first commanding officer, Lieutenant Colonel Warren, who was killed by a sniper on 17th September 1914. Of the total number of 66 officers eligible for the 1914 star, two thirds became casualties or were taken prisoner during the war.

Of the 334 original men from the battalion who died, the years of death are as follows:

For comparison, the total number of deaths in the battalion were:

As you would expect, the number of men killed from the original battalion decreased as the war progressed. The figures also show that the number of men killed in the battalion was fairly equally spread across each year of the war with the exception of 1915; the percentage is lower because the battalion spent much of the year being brought back up to strength and was only really in action during the Battle of Loos. It is also interesting to note that there were slightly more casualties in 1918 than 1914, when the battalion pretty much ceased to exist after the Battle of Gheluvelt on 31st October (see here – although the casualty figures at Gheluvelt will be the subject of a separate blog piece). Despite the similar casualty levels in other years, 1914 seems to feature more heavily in the battalion’s history and identity – perhaps because it did mark the end of the battalion in its original form.

When the battalion came out of action in November 1918 it was noted that there were only 17 men still with the battalion who had served continually with it for the duration of the war; one officer, four NCOs, and 12 other ranks. The medal roll shows us that one third of the battalion’s original members were killed, much higher than the overall casualty rate of c.13%. However that also means that two thirds of the original battalion made it home. The blank remarks and ‘discharged’ entries hide the true extent of the number of men who were wounded, and of course many may have been wounded and returned to the battalion. Nevertheless the 1914 star medal roll remains an invaluable research source which can shed light onto the impact of the war on the regular battalions.